Religious right gangs up on Scooby 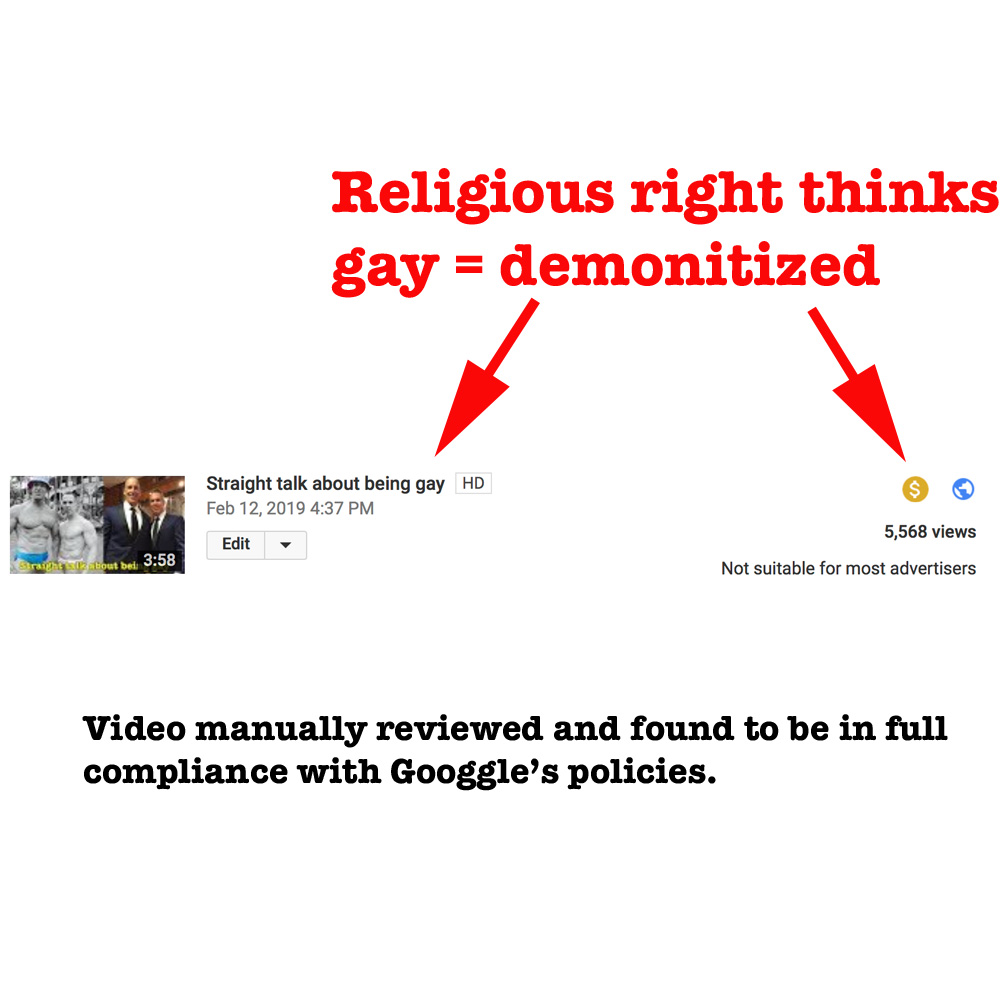 Religious right gangs up on Scooby

The religious right tried to shut my video down for daring to suggest that couples might want to think thru the financial implications of children.  They activated their “prayer list” to gang up on me and mark this video as inappropriate in hope that they could silence me.  What they overlooked were two things:

Video “Straight talk about being gay”

Kinda caught me off guard which is REALLY hard to do after 15 years on YouTube :) Took awhile but I think I have it figured out.

I thought I addressed the subject of why gay couples are richer than straight couples in a rather diplomatic and factual fashion, LOL! Apparently not :) The problem is that the people who are triggered and lash out are too scared to be honest so it took me awhile to figure out what was going on. These people have a lot of agendas but I think the basic thing that pissed them off is that I DARED to suggest that having lots of children as quickly as possible is not the right thing for everyone to do which resulted in a lot of personal attacks against me and tons of red herrings like bringing up AIDS etc. I think that a lot of these folks have Catholic agendas (cover the earth) or racists agendas (breed white people faster than immigrants are allowed in). I wish people would just be honest instead of sending up ridiculous and unrelated smoke screens. There is nothing at all with saying, “because of my religious beliefs I feel that contraception is wrong and that we should have as many children as possible”.

What is funny is the number of people who took this video as an insult to couples who have kids. Not sure how anything I said could possibly be interpreted in that way which leads me to believe they didnt even watch the video.

Attack the person when you dont have a good argument

Troll: Scooby try to train your neck for the symmetry of your body is balance.

Scooby: You probably do not know how stupid your comment is so I will explain to you. First, you have no idea what my fitness goals are and you are telling me how I should workout? You also have no idea what my joint limitations are and you are prescribing exercises? What would you think of a doctor who suggested surgery before he examined you or looked at your lab results or x-ray? Also, you kids under 30 are clueless about the challenges presented to a 60 year old. 60 year olds do NOT lift for aesthetics. I would suggest the time you waste telling others what they should do would be much better spent on your OWN fitness, nutrition, health, and self improvement. What is your 5k time? What is your cholesterol level and blood pressure? What is your resting heart rate? How is your career progressing? What kind of progress are you making toward being able to quit your 9-5 job and pursue your passions? Consider getting your own life in order before wasting time with naive suggestions for others. https://youtu.be/3A_-3byCWXc Oh, and by the way, this video was about why gay couples make more money than straight couples.

Troll: I wasn’t expecting you to cash in on this agenda, scoobs. I have mixed feelings, not about you being gay, but you pushing this mumbojumbo.

Scooby: Great debating tactic! When you have lost the argument, attack the person! Brilliant!!

Troll: I don’t agree about all what you said  What you said is not facts as you make it sound like… it’s only your point of view I feel sorry for you I hope you know what is the Primitiveness

Scooby: Why the stupid red herring. Why not just come out and say that for religious reasons you think parents should have as many children as possible, as fast as possible? No, its not opinion, its fact. Check the link in the video description. Which fact do you dispute.?

Troll: When you announced that you where gay a few months ago I didn’t give a damn. But when you start saying gay people are overall better than straight people then you really might as well be racist.

Scooby: LOL! You didnt even watch the video and you have never watched ANY of my videos. Why the stupid red herring. Why not just come out and say that for religious reasons you think parents should have as many children as possible, as fast as possible?

Troll: The political chaos is getting him, otherwise what is the point of this, hope your fans dont regret it as they grow up.

Scooby: You clearly know nothing about me nor have you ever watched any of my videos so let me tell you what I am about. I view my job is to help educated teens who are unfortunate enough to have a parent like you. You know nothing about health nor fitness. You are clueless about money management and you are clueless about how to make a positive impact on this world. This video is part of my series on investing and financial independence: https://www.youtube.com/playlist?list=PLWV7fhqk4Gf1yAIzdhgmIR-7k5_7WLo96

Troll: Produce fewer children? Well actually you produce no children, you adopt them.

Troll: You can be gay, but be mature adult. The minute you start advertising your ideological view points, my respect goes on 0%. I’m 22 and nowadays in college campuses these political correct types are true savages. They demand basic respect, but never respect diversity of opinion themselves.

Scooby: Exactly what “ideology” am I pitching here? Telling couples to THINK about the financial implications of having kids before they have them is ideology? In my view, its called critical thinking and smart decision making.

Read these jems yourself!