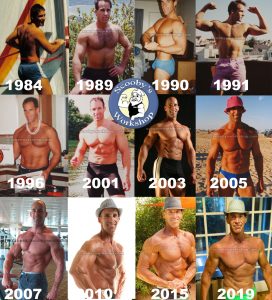 I should have done this ages ago but it was very time consuming to dig up all these photos. Today people have Facebook timelines to pull photos off from, I had old fashioned paper photo albums and a few old directories of digital photos from old crashed Microsoft Vista machine. Anyway, took me half a day but I was able to dig up enough shirtless photos to show my bodybuilding progress thru my 30 years of bodybuilding.

A couple of observations are in order here. The first photo was taken about a year after I had started messing around with weights but that is a good “before” picture. You will note that in the first six years of lifting (the top row), I definitely got my newbie gains. Hard to estimate from those photos how much LBM I gained in those six years, maybe 30 pounds? These first five years I was working out in a gym at the company I was working at. There were a bunch of the old style universal machines and dumbbells up to 40 pounds. Not a great gym but better than nothing.

In the ten years from 1991 to 2001, I also made a significant transformation, almost as impressive as my newbie gains over the first 6 years. In this period, I started working out in a really good real gym that had lots of free weights and excellent machines. If I had to guess from the photos, it looks like I added about 20 pounds of muscle in those ten years but it was a very important 20 pounds. Definitely bigger. In fact, by 2001 I had reached a level of muscularity that, in retrospect, was my genetic max. From newbie to genetic max, I added about 50 pounds of muscle in 17 years of lifting..

From 2001 to 2015 is a very interesting period. Its hard to say because I don’t have any accurate scale records but judging from the photos I would say that not only were there no muscular gains during this 15 years but I probably lost muscle.  I worked out even harder but despite my efforts, as you can see from the photos, I gained nothing. The thing was though, exercise made me feel so good that I did it despite the absence of gains. In 2003 I did my first photo shoot with a friend who is a professional photographer. It was that photo shoot that taught me “If you cant get bigger, get leaner!” because I realized how much more massive I looked when I was lean. You will notice that from 2001 onward, I have continued to get leaner. No, its not easy! If I ate what I wanted I would look like my 1996 photo all the time. I have to do massive amounts of cardio and eat very clean to maintain this low level of bodyfat.

Unfortunately from 1991 to 2001 there is a “digital void”. I had moved away from film and was using digital, the problem is that these digital images are hard to date. Old digital cameras didn’t include the photo date in the info fields so the only way to date photos is to cross reference with old daytimers – a very arduous task. I am sure I have digital photos to fill in this important 10 year long void in my physique history but its going to take days worth of work to figure it out. For now, all I have is a shot taken in 1996 where I was rather .. chunky shall we say. My only guess is that is the era when I was trying creatine for the first and last time. Back then, we drank it with grape juice so I was getting tons of sugar calories which made an appearance on my belly. I know many of you have heard this but the reason I became anti-supplement was because of this creatine experiment of mine. A routine exam turned up alarmingly elevated liver function which was traced to a bad batch of creatine. I didn’t have any lasting liver damage but it cost me a lot of stress and a lot of doctor visits … and taught me a very cheap lesson about supplements which I have not forgotten.

Anyway, I wanted to do this because I have seen no other bodybuilders post progress photos over such a long span of time. Its really important because so many people look at me and ask, “how long to get as big as you?”. I have always made it crystal clear in my muscle gain calculator and my expectations page that gaining muscle is a *very* slow process and this photo collage shows just how slow.  Despite all my ranting about how slow muscle gain is, there are still people who label themselves as “hard gainers” after a few years of lifting when they have failed to gain the 50 pounds of muscle that “they deserve” because they have worked “so hard”.  My advice is to buckle up and go for the long haul.  Find ways to incorporate exercise into your life so it is something to look forward to rather than a dreaded check box on your daily todo list.   Focus on how the good the exercise makes you *feel*, then if you happen to get some muscular gains as well,  its just icing on the cake.