The Truth About Low Carb Diets

The Truth About Low Carb Diets 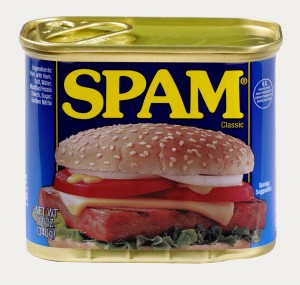 My aversion to “low carb diets” is the name. Here is the problem. The American population as a whole isn’t the most educated when it comes to nutrition, its why we have an obesity problem. When you tell the average American that a low carb diet will help them lose fat fast, they will remove the potato from their steak and potato dinner and remove the toast from their bacon and egg breakfast. THAT is what kills me. That type of “low carb diet” is health insanity and bears no resemblance to the kind of low carb nutritional plan that many at sweat4health have successfully used.   Their diets have  been very low carb but also had an HUGE amount of fiber and vitamins from the leafy vegetables, seeds, and low carb grains.

“Low carb” has gotten a really bad reputation.  Not because there is anything wrong with the low-carb nutritional philosophy but rather because of the horrible way that most people tend to implement it.  There is no dispute, with low carb diets and ketogenic diets people lose weight – LOTS of it. The question is, is it healthy and what exactly are they losing – fat, muscle or both. As with most things, the devil is in the details. Low-carb by itself is neither good nor bad, its how you implement it that determines if its healthy and if you lose just fat or lose muscle too. 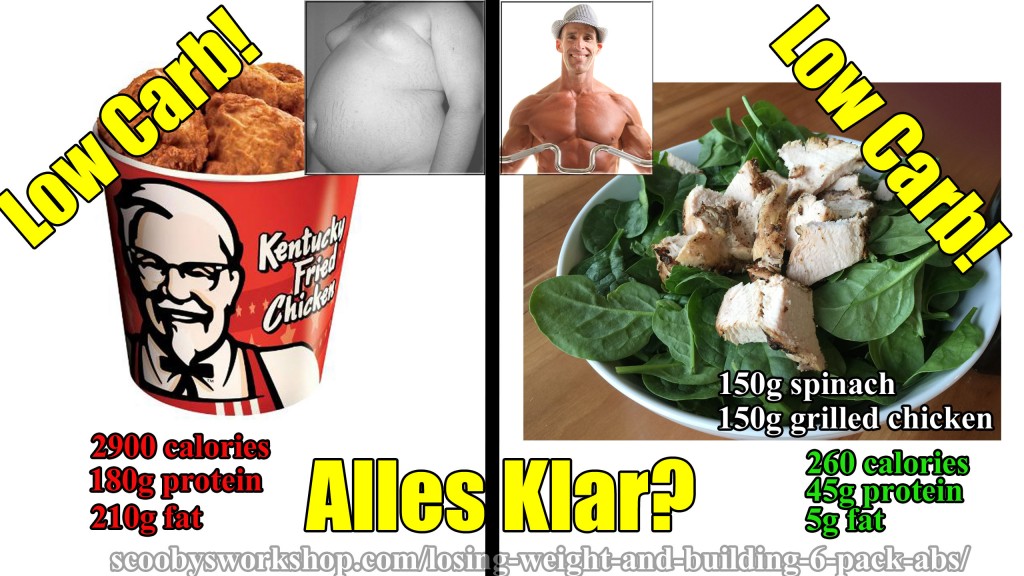 There have been a lot of questions about “what is wrong with bacon/butter/etc”.  Well, lets talk about why its garbage.  First, you might be surprised to find that butter is the #2 worst pesticide contaminated food source in America – thats whats wrong with butter.  Most pesticides are fat soluble which means the pesticide tainted grain the cows eat is more likely to end up in butter and cheese than in the nonfat milk.  That is also the reason I do not like cheese as a fat source in keto and low carb diets.  So what about the hot dogs, bacon, sausage, spam, and lunchmeats?  Read the ingredients list!  Anything pickled in unpronounceable chemicals and extruded in round or square shape is NOT healthy.

Now lets look at healthy low-carb. I have actually been doing low carb for about a month now as I am cutting for my upcoming mens physique contest. This is healthy low carb. Not once in the last month have I been hungry and because I have taken very careful daily measurements, I know that I have not lost *any* muscle mass as I have dropped from 10% bodyfat down to 7%. I eat LOTS of vegetables, probably 2-3 pounds of fresh low net-carb vegetables a day. I eat lean chicken breast and egg whites for protein so that I can get my fats from a variety of healthy sources. I get lots of fat from flax, chia which are also very low net carb. I also use a LOT of nuts and olive oil along with a few egg yolks a day to get some good fats from animal sources. THAT is healthy low carb.  There is no reason at all that a low carb meal cant be both healthy and help you lose weight at the same time.  If you want a healthy low carb meal plan or a healthy keto meal plan that will let you gain muscle while losing fat then these custom meal plans will work for you!

There are very healthy ways to lose weight without carbs (low carb diets) and ways to lose weight with carbs as the cornerstone of the diet (McDougall type diets). They BOTH work and they both *can* be healthy. “Low Carb” is a catchy name for a diet but its an unfortunate choice because it leads so many to a very unhealthy, fiberless, vitamin-less version of the low carb diet. ALL diets work because anytime you run a caloric deficit, you will lose weight – period.  There are three questions though:

Low carb diets work great at removing the fat quickly but long run, the yo-yo effect seems to put all  the weight back on … and then some.  Low carb is very, very hard to maintain long term – not impossible, but very hard.  The problem is that long term weight loss requires lifestyle changes along with changing your food preferences in favor of low calorie density foods.  Please read about diet soft landings to help you keep the weight off that you have lost!  Back to “low carb” diets, I could get completely behind it if we changed the name, here are my suggestions:

The new names for “low carb diet” would emphasize the fact that they need to include massive amounts of low-carb vegetables.

What is healthier, low-carb or high carb?

Well, it depends.  In my opinion, we humans in all our hubris have done a sensational job destroying our food supply as we nearly dislocate our shoulders patting ourselves on the back congratulating ourselves at how smart we are. We have found ways to increase food production and drop prices dramatically thru pesticides, fertilizers, intense cross breeding, and mono-culture crops. We have found ways to preserve food so that it keeps for months or years rather than going bad after a week or two. We have found ways to make the food irresistible with artificial flavors. IMO, all these “improvements” are the cause of many of our modern health problems and food allergies.

The bacon that our great, great, grandparents ate was very salty but otherwise relatively healthy. Nowadays we pigs who never see the light of day and are so inbred that they can barely walk turned into “bacon” with so many nitrates and other chemicals that they bear no resemblance to the product our forefathers ate. Thats where the minimally processed part comes in. Bacon, bologna, and sausage have no place in a diet other than as an occasional cheat meal.  The problem is that the average person who does a “low carb” diet is going to eat more of these horrible products because they are yummy, salty, spicy, and high in fat – just what the diet calls for.

Its not just our meat supply that we have tainted, wheat is another great example.  A thousand years ago, bread was the healthiest thing around – it didnt get the name “the staff of life” for nothing!  Then with century after century of cross-breeding and “improvement” – we succeeded in turning the healthiest product on the planet into a loaf of junk food.   (See all about bread). 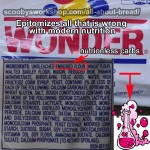 Its infinitely more important to avoid overly-engineered foods than it is whether your diet is “low carb”, vegan, or vegetarian.

Rather than worrying about whether low carb lifestyle is healthier than a high carb lifestyle, I think we should focus the discussion more on the quality of those calories in each case.  A calorie is not a calorie.