EXECUTIVE SUMMARY:  Cryotherapy for fat loss works.  I put myself into a borderline hypothermic state for about 5 hours on two consecutive days while consuming a caloric surplus of approximately 2000 calories and still lost fat.  I can also tell you that anyone who uses cryotherapy for fat loss is an idiot because the pain of the cryotherapy FAR exceeds the pain of ANY type of cardiovascular exercise, aka the old fashioned way to lose fat. Not only that, lets not forget the fact that cardiovascular exercise is critical for good health!

Cold water showers, professional cryotherapy tanks are of too short a duration in my opinion to have any effect at all on fat loss.   Sleeping without a blanket in a cold room would work BUT its absolutely stupid because you will not sleep well and sleeping well is critical to building muscle and insuring that the weight you lose is fat and not muscle – please read about the importance of good sleep!    Sacrificing quality of sleep in an attempt to lose bodyfat will fail.  DO YOUR CARDIO!!! 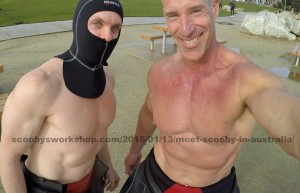 Normally when cutting using low carb like I have been, a 2000 calorie excess would make me swell up like a balloon, both in weight and waist measurements.  After my cryotherapy and 2000 calorie surplus weekend though, not only did I not balloon up, but I continued my fat loss!

HISTORY: So Scott and I are doing a 3 day dive trip in Cairns Australia and Scott needed to get certified before our trip.  Well, technically I didnt need to take the certification since I was certified 35 years ago and did a bunch of diving in Florida but it was prudent for me to retrain since there are mistakes that can kill you when diving.  Anyway, after the written exam there were four training sessions in water, two in a pool and two in the Pacific Ocean. Although the pool was heated to 81 degrees and we had 3mm wetsuits on, I still got *very* cold.  There wasnt a lot of movement or exercise in the pool, just skill drills like removing the mask underwater and clearing the water out, so was not able to keep warm.  After the first pool session I was so cold that it took me 24hrs to feel fully warm again.

Next weekend was our two ocean dives at Breakwater Cover in Monterey Bay, where thousands of Californians get certified every summer, except we are doing it in January … and its raining.  Water temperature is the same but air temperature doesnt allow warming up when you get out of the water. Having done this before I warned Scott that of all the diving we would be doing in our lives, this would be the most miserable, and so horrible that you might never want to dive again.  After getting certified last time in 1982, I went to Florida, did hundreds of dives and when I came back to California, never had the desire to cold water dive again.

Sure enough, hit the mark.  First of all, we are in a big dive class and the two of us were literally the only ones who had our acts together.  Had it just been us and an instructor, our total water time would have been about 40 minute for the weekend, but because of all the waiting for people who lost their fins, dropped their weight belts, etc, that 40 minutes expanded to 10 hours of water time.  The second day in Monterey was the most miserable of all because the visibility was somewhere between elbow and wrist, about 1 foot.   We had 7mm wetsuits but still, each dive, I got very close to having to red-flag myself and get out of the water for safety.

Anyway, we got certified and are looking forward to diving in warm Australian waters with things that want to either eat us lunch and sting us to paralyze us to stop our breathing. 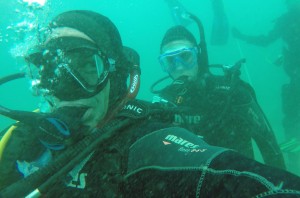 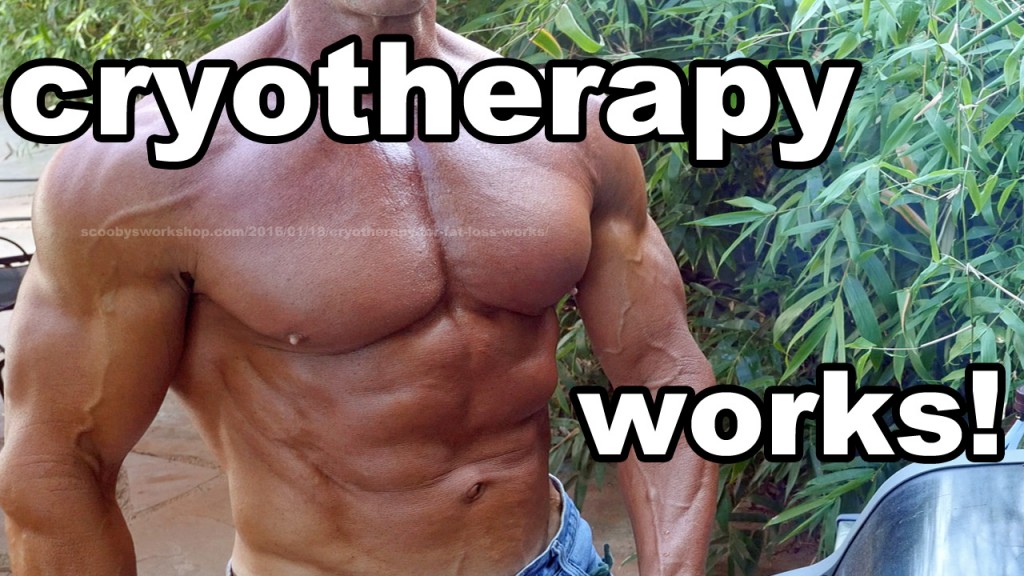