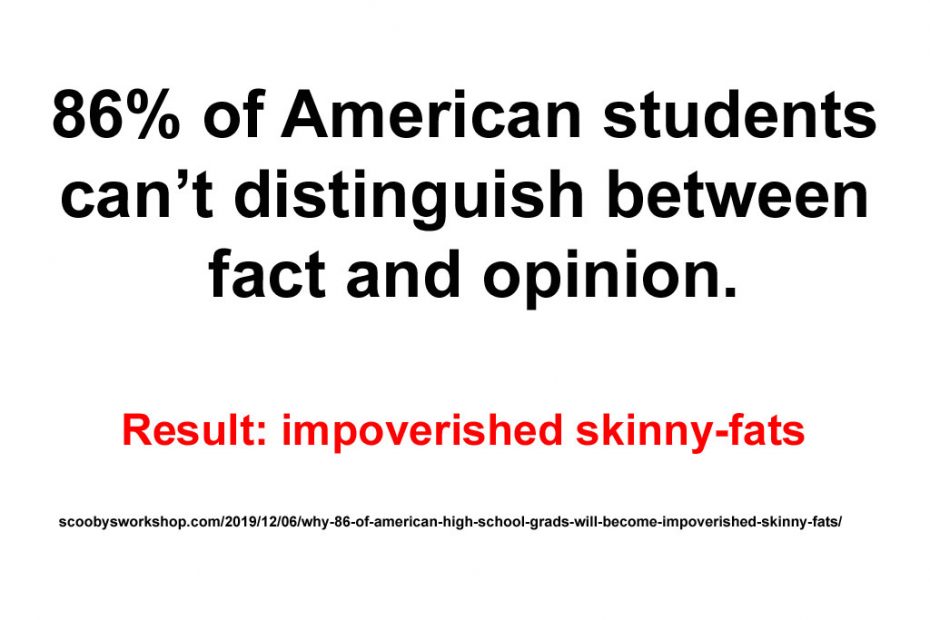 Did you know that only 14% of American students can distinguish between fact and opinion. I finally figured out what I have been fighting against for my 15 years of being on YouTube. It was a mystery to me why people have always ignored my common sense, unbiased, old school “lift hard, eat clean and sleep” advice in favor of the slick sales folks epitomized by Mike Chang of sixpackshortcuts. All along I was chalking it up to the fact that people believe what they want to believe and they desperately wanted to believe there were shortcuts to gaining muscle and strength and shortcuts to losing fat. I realized that its far worse than I feared. America has two big problems, we are graduation people who cannot critcally think and we are putting out graduates who cannot distinguish between opinion and fact.

The real problem is that the American educational system is no longer putting out people who can critically think. By this I mean that when they are presented with information, they can analyze it rather than simply nodding their head. A critical thinker will examine the qualifications and motivations of the information source and take that into account when deciding if they should believe it or not. A critical thinker understands the difference between urgent and important and can manage their focus appropriately. A critical thinker will examine the data or research themselves rather than taking someones pre-digested interpretation of the fact. A critical thinker will ask what the ramifications of the findings are. A critical thinker will not buy a hot new supplement based on forum buzz and marketing but rather ask what evidence there is of effectiveness. If there is research showing the supplement is effective, they will look at who funded the research and where it was published. In my 15 years on YouTube I have noticed this problem getting far worse. The number of questions starting with “I heard that … ” are increasing. I am flattered that people trust my answer to these questions but as reliable as I think I am, not even I should be trusted. Not even I know all the answers. People need to dig to find the primary sources and reason the answer out for themselves. Marketing propaganda and misinformation are everywhere and if you cannot sort things out for yourself then you become a puppet of those who can.  Those without critical thinking skills very often fall prey to conspiracy theories which is a very dangerous thing for a democracy.

Ability to distinguish reliably between fact and opinion

Did you know that only 14% of American students can distinguish between fact and opinion? This explains a lot of arguments I have had with subscribers over the years. Its no wonder there are so many “hardgainers”, its people believing the BS these high school dropout fake natties spew. YouTube fitness “experts” are very bad examples of this, usually presenting things as FACT when they are actually opinion designed to manipulate viewers purchase or viewing decisions. YouTube fitness trainers are famous for making wild, unsupported assertions about keto, intermittent fasting, and vegan nutrition and presenting them as fact. Just because you can google and find a paper with the right key words in it does NOT make it fact. Anecdotes are not research. If you think I am exaggerating here, as an example see Kinobodys claims about intermittent fasting – he makes the unsupported medical claims that IF eliminates colds, eliminates acne, increases testosterone, and improves “breathing conditions”. The sad thing is that 86% of American students reading Kinobodys above unsupported medical claims interpret them as facts. Research never “proves” anything, at best, it’s suggests things and usually just poses more questions. In my view, its only when you look at meta-analysis of hundreds or thousands of research findings that you can begin to get answers. A great example of this is the subject of alcohol. There are a number of individual studies that show beneficial aspects of drinking alcohol BUT when you look at a meta-analysis of thousands of studies it becomes clear that there is no healthy amount of alcohol because all the minuses of alcohol consumption outweigh the few tiny positive effects. In the fitness industry, marketing white papers are disguised as “research”, and few people can tell the difference. People who cannot differentiate between facts and opinions/marketing are simply puppets of the powerful and are not going to ever get ahead in this world.

Why 86% of grads will be in poverty

The job marketplace for high paying jobs is now global, its only the minimum wage service industry jobs that are free from competition from other countries. To make significantly more than minimum wage requires critical thinking skills.  American engineers have been competing against those in India and Eastern Europe for two decades now and doctors are now experiencing that same competition in some fields like radiology.  American high school grads have not been trained in any skilled trade, dont have high level science and math skills, and are not able to critically think. In short, 86% of todays high school grads are only capable of minimum wage service jobs where international competition is not present.

Why 86% of grads will be sickly skinny-fats

There are thousands of “experts” on YouTube all giving conflicting advice. For the 86% of American students who cannot critically think nor distinguish between fact and opinion, they will fall for the slick talking fake-natty snake oil salesman pitch. The pitch will inevitably lead to them buying a $97 workout program or stack of supplements. These folks will go from one YouTube expert to another in their quest for shortcuts and promises of adding 1″ on their arms FAST! These poor folks will forever be weak and fat.

Here is an example of what I am talking about. The poor person below clearly is one of the 86% of American students who cannot reliable differentiate between opinion and fact. Its clear that this kid is getting his nutritional advice from some fake-natty YouTuber who pushes keto and pretends to be science based even though he flunked out of high school chemistry and physics. Googling to find research to “prove” yourself right is not “science based”, its cherry picking stupidity. What this kid has been told you is manipulative opinion and not fact and this kid was unable to distinguish this. If you were to do a meta-analysis you would see that there is a massive amount of research showing that minimally processed vegetables, legumes, fruits, and grains with lots natural fiber are essential for good health. This kid keeps coming back to “absorption” like that is the #1 criteria for choosing foods. Its pretty clear that he is just parroting something he does not understand that he heard from a YouTuber. Why on earth would you possibly choose absorbtion as more important than health or performance? If you are not “absorbing” enough nutrition, then EAT MORE! Choose your foods based on their health benefits and ability to build muscle, not “absorption”. Drinking water decrease the absorption of food but yet we still drink water. Yes, fiber does slow the digestion of food and in some cases lowers the amount of energy that the body can extract from it but this is a good thing and not a bad thing. Its why 100% whole wheat bread is healthier than Wonderbread – because its less processed and has more natural fiber it is digested slower. As far as eating lots of cholesterol to “properly absorb nutrition”, this is a great example of both lack of critical thinking skills and inability to differentiate between fact and opinion. 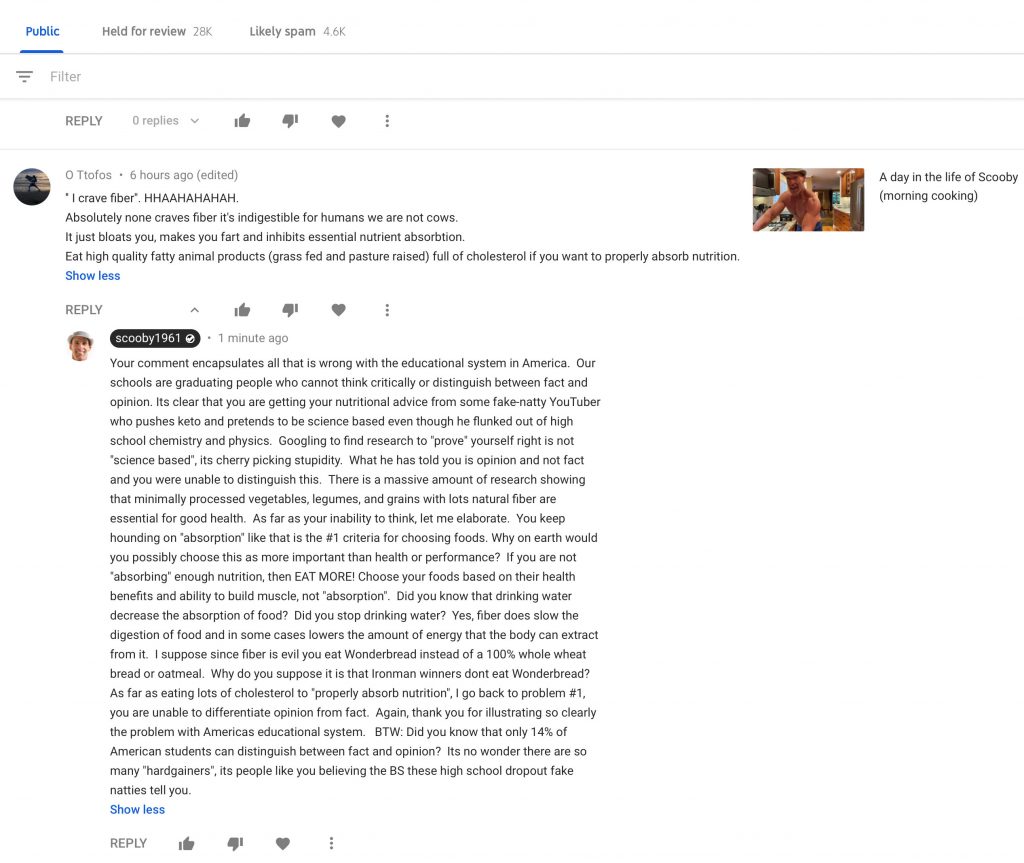 The New York Times is a pretty reliable source in my view and I got this number from this podcast; however, no references were listed as to the details of this study.  After hearing this report, the first thing I did was google to see if I could find this study, and I could not.  The reason I went forward with it is that I found a large body of other studies that confirms that American Students do have a hard time telling “fake news” from facts. Distinguishing fact from fake news is a LOT easier than it is to distinguish fact from opinion, and we Americans cant even to that.  Without seeing the actual research/study, my natural inclination is to believe that its a problem but not as drastic as the 14% number makes it appear.  The thing is that it does not matter if its 14% or 50%, its still huge problem that our students are so easily mislead by marketing propaganda and paid content.   It IS 100% clear to me that unless we start graduating people who have critical thinking skills and the ability to differentiate between fact and opinion that the next generation will be obese and unhealthy because they will fall prey to all the sixpackabs snake oil salesmen.

How did this happen?

Ta-dah! Bored graduates reading scores are even lower despite all this focus AND grads have no trades or real life skills.  When  I was in 7th grade, my favorite classes were science, drafting, wood shop, metal shop, aviation, and German.  I checked online and only science is still taught.  It’s not that the demographics of my school has changed, its still firmly middle class like it was when I went there, it’s just that the focus is different.  You might consider shop classes to be a waste of educational dollars but they are not, they are a very wise investment.  Students get bored easily and don’t understand why they need to learn the science and math they will “never use”.  Put them in a shop class where they have to draw up plans for their project and they suddenly understand the value of math.  You have to make students excited about learning, not stuff it down their throats.

How we can fix the American educational system

I think we have screwed things up with our well-meaning policies that we should consider following the example of countries who have done well.  I had the pleasure of spending the evening in Lausanne Switzerland with two teachers discussing education.  Some in America are fond of saying that throwing more money at our educational system will not solve the problem, that is true, but taking money away will make it worse.  What we need is to invest more in education AND completely reform it.  Our current crop of educators are devoted, exhausted, and impoverished.   In America, starting salary is about 35k.  Contrast that to Switzerland where starting salary is about 100k.  The low pay signals to everyone in the American educational system from District Superindent down to student that we do not really value education where as in Switzerland, being a teacher is a prestigious profession.

Another huge difference is tradeschool approach.  In Switzerland and much of Europe, students in high school have the option of going the tradeschool route or the academic university bound route.  This acknowledges what we all know, not everyone wants to or should go to the university and training them for this is a cruel waste of their time.  If someone wants to become a CNC machinist, teaching them differential equations is a waste of time, they should be in metal shop class learning to use a lathe, vertical mill, and brake.  Teaching someone what they find interesting, fun, and something that will give them a high paid trade job is what the educational system should do.

The American approach of leaving trade education to the private sector is embarrassingly ineffective.  Many of these private trade schools seem to be machines designed to milk the federal loan programs of money by creating party schools for high school grads that leave them with oppressive student loan debt and no job skills to pay them off.