Who is a better fitness inspiration, Arnold Schwarzenegger or Zyzz?  Arnold won Mister Olympia, became a movie star, made millions, married a Kennedy, and became the governor of California. Zyzz became aesthetic, went to music festivals, and died doing drugs in Bangkok at age 22.  Who is the best fitness inspiration?

I am aware that neither Zyzz nor Arnold are saints but this is not a pearly gates saint-hood contest. The sad truth is that saints don’t make good role models, otherwise we would have a hell of a lot more saints around. My role model was Jack LaLanne was as virtuous as they come, he was a puritan, but the few folks he inspired are a drop in the bucket compared to what Zyzz and Arnold inspired.

Yep, Both Arnold and Zyzz used steroids. The difference is that Zyzz used small amounts AND admitted it. Although Zyzz used steroids to speed his mass gain, his physique IS achievable naturally for may people given enough time and work. Arnold’s physique on the other hand is not achievable by anyone without buckets of steroids. Although he admitted it, it was kept hush hush for many years because it didn’t fit with the image that the Weider empire wanted to project for the sport of bodybuilding.

Second, this is not a physique contest, Arnold has a physique in a different league than Zyzz – you cant even begin to compare. So, the question is, who is the best fitness inspiration. Who has started more people into a healthy, lifelong, passion for fitness.

Lets start with Zyzz. Zyzz went from a lanky teen who nobody even noticed to a charismatic figure that millions followed, and admired. Everyone except high school jocks can relate to him and be inspired by his transformation. Yes he used steroids but his physique IS achievable naturally for many people given enough hard work and clean eating. His lean, muscular physique is a great goal for people. 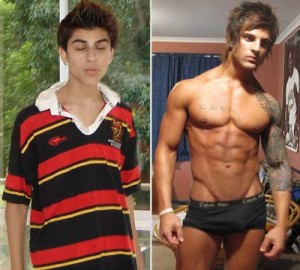 To those of you saying that both Zyzz is horrible role model, let me ask you this, why must role models be virtuous? Think about that one for a minute. The government has spent billions on ad campaigns like the Regan “Just Say No” campaign to try and keep kids from using drugs to no avail – people laughed. The death of Zyzz has done FAR more good than the anti-drug ad campaigns for convincing youth that perhaps the YOLO lifestyle and reckless recreational drug use are not such a great idea. Saints make poor role models because people cant relate. Zyzz was human and made mistakes that people have learned from.

Zyzz is both a positive and a negative role model rolled into one making him one of the most effective fitness and health inspirations of all time in my opinion. But is Arnold even a better fitness inspiration?

In the 70s and 80s when the Joe Weider empire was growing rapidly, Arnold and his peers who competed in Joe Weider’s contests like the Mr Olympia got more people into lifting weights than ever before … but like me, we quickly became disillusioned.  Admission that all the contestants in his Mister Olympia contests were juiced to the gills rather than using the Weider supplements would interfere with his incredible Weider fitness empire’s profits so the world “steroid” was never mentioned in the Weider magazines.  All the Weider muscle magazines told us that all we had to do to look like them was to workout hard and use the Weider supplements.  The workouts they gave were for steroid users so when natural lifters attempted them they suffered from injury, overtraining, and burnout.   The Weider fitness empire was sued many times for false advertising but it didnt stop them (Weider legal issues).  You ask how me and everyone else in the 70’s and 80’s could have been so incredibly naive as to think these folks were natty? Easy! No internet!   Thats when I started lifting and the only info source was a few dusty academic books in the library and the Weider muscle magazines. We didn’t have any source of information other than what the Weider marketing people fed us and they fed us deceptive BS. 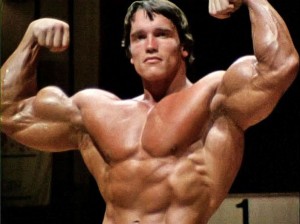 In my opinion, although Arnold along with the Joe Weider is a founding father of modern bodybuilding, thats a very bad thing. He helped bodybuilding become about deception and big money rather than about health and fitness. If you wanted to win a contest in that era you had to kiss Joe’s butt, promote his supplements, and preach his “10 Weider principals”. I think Arnold with Joe Weider’s help has hurt way more people than he has inspired. Millions of people started lifting to look like Arnold, they took all the supplements they were told to … and they failed to look anything like Arnold. So they put their tails between their legs, packed their gym bag, and stopped lifting forever. IMO, Arnold and the Iron-Empire are responsible for starting the male-insecurity trend.

Enough of the Arnold-bashing, back to the question. Is Arnold a fitness inspiration? No! Not at all. His life has been a fairy tale and fairy tales don’t inspire. If his life was the subject of a movie 50 years ago nobody would have believed it. Poor immigrant lands in USA speaking only broken english. Lifts weights. Takes buckets of steroids and becomes Mr Olympia. Becomes a movie star and box office sensation worldwide. Marries a Kennedy. Becomes the Governor of the largest state in America. Is that inspirational? Its amazing! But seriously, what are the chances that will ever happen again? Zero! Arnold had the genetics, incredible charisma, incredible intelligence, AND he was in the right place at the right time.

Let me come back to this point, to be inspirational, people have relate to their role model and see that they too could achieve what they have achieved. Thats just not possible with Arnold, its like looking at a statue of Zeus and aspiring to throw lightning bolts.

TLDR? Here is the summary

Zyzz was a true inspiration, both as a positive role model and a negative role model making him one of the best fitness inspirations of all time. His physique is a great goal for people because almost everyone can achieve it naturally IF they are willing to put in the years of lifting and nutritional discipline. His death from his party animal drug use lifestyle has made him one of the most effective anti-drug campaigns of all time in my opinion.

Although Arnold is extremely intelligent, has incredible charisma, and was an incredible bodybuilder he has done far more damage than good. His physique is unachievable without massive amounts of steroids and thru his association with the Joe Weider fitness empire, he started the teen insecurity trend.

I personally welcome the current trend where the IFBB steroid contests are becoming less popular and the men’s physique contests featuring much smaller and healthier physiques are becoming more popular.  Of course, the men’s physique is history repeating itself.  Just as the Weider empire swept steroid use under the carpet in the 70’s, the men’s physique is doing the same today.  Although some of the physiques are achievable naturally by some given years of lifting and clean eating, to win the contests seems to require that you take small amounts of steroids so you can pretend to be natural.  In many ways this is even worse.  Back in the 70’s me and my peers were complete idiots to think that we could achieve Arnold’s physique naturally.  Today because its so subtle and within the realm of believability I think it does even more to accelerate the teen insecurity trend.

previousSpit it out!
next2014 San Jose Women’s Bikini Championships and IFBB, NPC bodybuilding, figure, and physique