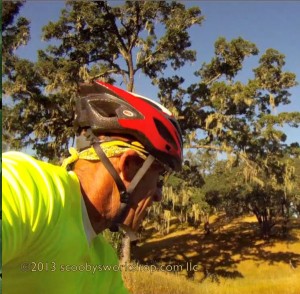 I just burned off 7617 calories doing my double century bike ride this weekend, talk about an extreme calorie burn! Over the course, I probably consumed about 6000 calories though. With an event like this I was far more concerned about insuring maximum performance than in limiting calories. Perhaps I could have done it with 1000 calories less but the bonk-danger is too high. I was stuffing my face at every opportunity – several times I was so hungry that I ate three cliff bars at a time. Trouble is, I wouldnt recommend this type of cardio for fat loss, its way too extreme. To trim down and see those abs, 20-60min of cardio a day is much better because it prevents overuse injuries.

The temperature was in the 90s and I sweat profusely even in moderate temperatures so I was pounding the water as well, probably 5-7 gallons over the day. Even being slightly dehydrated drastically reduces performance so I didnt let that happen.

I met my goal of making my average speed 1mph higher than last year. I also did much better with butt-rash this year. My left knee was as just as much a problem as last year though and after mile 100 I had to stretch out the quad every hour to be able to continue riding. The second 100 miles, I was knee-limited. If you look at my heart rate over the 200 miles, I did a pretty good job of keeping it at my target which was 140bpm over the first 100 miles but over the second 100 miles my knee would just not allow me to push hard enough to get up to 140bpm.

I think this might be it for my extreme biking events. Its been fun, its been a challenge, but I think its time to move on to something else. I will still use cycling as my primary form of cardio as I love it so much and its so convenient but I dont think I will do any more of these 200 mile races. I still love triathlons and the half Ironman is a nice distance, perhaps I will fall back on that, or perhaps something entirely different.

During the last olympics, some silly myth got started about Michael Phelps consuming 12000 calories per day. I have to tell you, I would love to see the calculations that show anywhere close to that (hours swam, %max heart rate). My nearly fifteen hours of pushing near my max limit only consumed about 8000 calories. Granted, the cool water burns a bit more but I seriously doubt that could make up the difference and I can guarantee you that he did not train 15 hours a day. OK, that was a tangent! 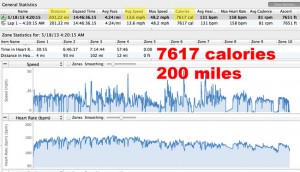