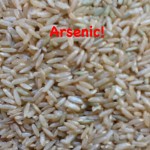 Another health food has fallen from grace, this time its one no one suspected – rice.  In this article we look at what happened with rice, and what you can do to protect yourself against the next “rice”. Consumer Reports, the only magazine I have subscribed to for more than 25 years, broke the news with their report “Arsenic in Your Food“.

Is anyone having Deja Vu?  Not ten years ago, health minded people chomped down the canned tuna.  It was cheap, convenient, and healthy … or so we thought.  Forget the year, 2008 I think, that “shocking” report came out that canned tuna had shockingly high and dangerous levels of mercury in it.  Fast forward to 2012.  Rice, especially brown rice, epitomized health and for many people it provided the nutritional backbone of their diet.  Healthy complex carbs.  Then, yet another “shocking” revelation, rice has lots of arsenic in it!.   Is this something new?  No, its been in our rice for DECADES!  Where are the government agencies that are supposed to be insuring our food safety?  Who is sleeping at the helm of the FDA?  Lets look at what happened with rice and what you can do to prevent the next “rice”

No secret that growing rice takes lots of water, it actually grows in flooded fields.  Well, turns out that the last 50 years in America has been irresponsible in its stewardship of the farmlands and poisoned them with appalling things.  We used to dump on the DDT like it was water and it turns out that we seem to like using arsenic also.  In the last century, America has dumped over 1.6 million tons of arsenic onto its farmlands.  Although arsenics use in insecticides was banned in the 1980’s, its still in the soil and arsenic is still allowed in animal feed and fertilizer.  So its not a big surprise that rice floating in arsenic runoff water has high levels of arsenic in it.  What is pretty shocking to many is that the “organic” label is of no help here because of how long the arsenic sticks around.  Consumer Reports November 2012 issue found that the organic rices could be just as bad arsenic wise as the non-organics.  The rude slap in the face for health minded folks is that since the brown rice doesnt have its outside polished off, it actually has more arsenic than the “unhealthy” white rice.   By the way, this isnt just a theory.  The National Center for Health Statistics looked at arsenic levels in humans from 2003 to 2010 and found that indeed, those people eating  two or more rice products in the prior 24hrs had arsenic levels in their bodies 70% greater than those who didnt eat rice.

What can you do if you love rice?  Wash it, and wash it good!  Use 6 cups water to wash every cup of rice.  According to Consumer Reports, this can reduce the arsenic levels by 30%

Since our government doesnt seem to be able or willing to protect us, what can you do?  Don’t put all your eggs in one basket!  Eat a varied diet!  Get your protein from a mix of legumes, eggs, dairy, chicken, fish, pork, lamb and beef.  Get your carbs from a mix of wheat, oats, quinoa, rice, rye, barley, buckwheat, and triticale.  You get the idea.  If any one of these items becomes the next arsenic tainted rice or the next mercury tainted tuna, then because your diet contains so little of it your exposure risk will be minimal.

By the way, many Europeans are shocked to learn that in the USA foods can be genetically modified without having to state it on the label.  California will be voting on proposition 37 which would make it mandatory to label all products containing GM foods.  If you live in California, read it and see if it is something you care about.

As an aside, consider subscribing to Consumer Reports Magazine. Their work is indispensable and can help protect us where our government does not. You may remember the name of their magazine from the protein powder tests of last summer where they found unsafe levels of heavy metals in Muscle Milk. A great magazine to support. As I mentioned, I have been a subscriber for over 25 years.