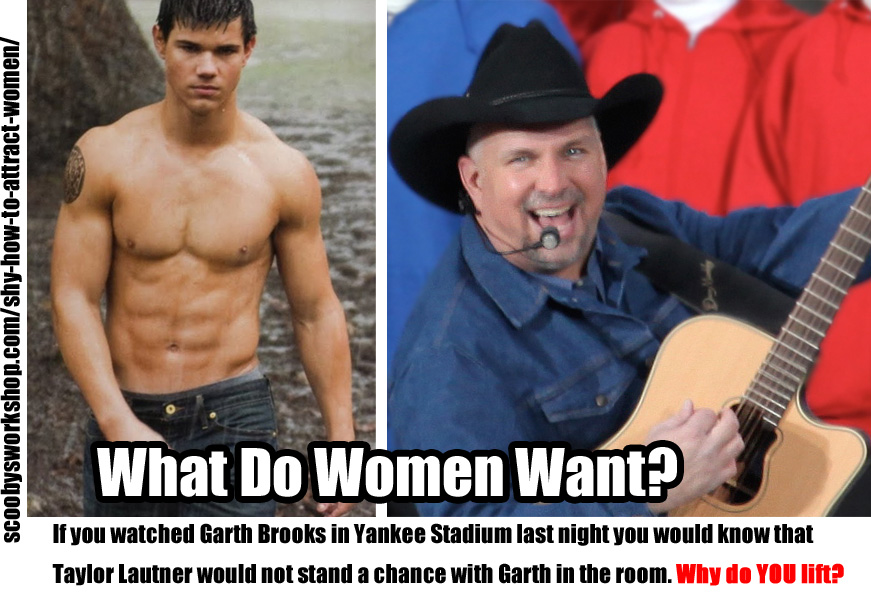 Last night I saw #GarthBrooks on TV in Yankee Stadium and you could tell the thousands of the young women in the crowd adored him. I had a funny thought while watching. If Taylor Lautner at his prime was standing next to Garth Brooks on stage and they both grabbed the microphone and said to the women in the crowd “Come get me!”, #TaylorLautner would be trampled and perforated by high heels with the stampede of women trying to get to Garth. Fifth Avenue marketing firms and their billions of dollars of ads have somehow convinced young men that having a hot bod is the most important thing in attracting women when it is NOT! If your primary reason for lifting weights is to get women then you are wasting your time, spend that 5hrs a week to learn to play the guitar! Why do YOU lift?

People selling $97 workout programs, $47 meal plans, and expensive supplements have paid millions to Fifth Avenue marketing firms to help convince you that muscles and abs are the best way to “get” women. Its not true! Lifting weights can significantly improving your success dating but not for the reasons you think.