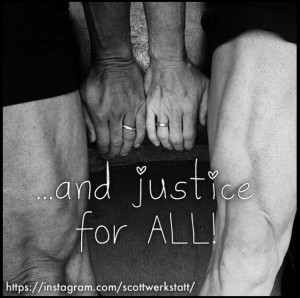 To me, the amazing thing is how fast recognition of gay marriage has occurred in America. In 1989 I worked for IBM and I worked with a group of about 15 gay and lesbian folks to try and get domestic partner benefits (aka health insurance). Back then only four companies in all of America had domestic partner benefits, not sure all of them but I know one was Apple Computer. Anyway, our pitch to management failed to convince them.

That was the era when if there was any show with a gay character in it, he was dying of AIDS because he was unfaithful to his partner. Being a gay person was not “cool” by any means in this era and many equated gay with AIDS. Gay men got beaten up and killed because people feared them, feared what they didnt understand. When I came out (1988), being gay was still a scary thing, it was a very bold step.

Then came “Queer eye for the straight guy” and all kinds of other TV shows that slowly showed people that gays were really not that different from everyone else other than they dressed better (just kidding, its a stereotype).  Its funny, I know a lot of organizations like HRC worked really,really hard on the marriage issue but I truly believe that television and mass media is to credit for the rapid acceptance of gay marriage. People fear what they do not understand and once there were enough TV shows and movies giving accurate portraits of gay people, most viewers got it.

Anyway, here we are in 2015 only 26 years after that failed attempt to get IBM to give us health benefits with nationally recognized marriage. I would have never had thought it possible.   Its just amazing that in such a short time, so much progress has been made.

In a way I feel sorry for those following now. When I finally realized I was gay and came out, it was a epiphany that changed my life. I know that today its not nearly as big a deal for teens to come out in high school. Because it was such a bold, dangerous thing for me to do, it forced me to be the assertive person that I was not. It forced me out of my shy shell in a way that nothing else could.  It forced me to realize that I was different and that I could make my own path in the world. I am not sure I would be who I am today had it been an easy decision to announce to the world that I was gay.

previousHow much exercise is too much? OTS, Hematuria
nextMen’s Physique Competitions