Its no use trying to lose weight, I have a DISEASE!

Funny timing, not twelve hours after I released my video on fat acceptance, The American Medical Association (AMA) released its statement that they now consider obesity to be a disease.  It took me several days and numerous pillow-screams before I could calm down enough to write about this sad day.  Why am I sad?  Glad you asked.

The root of our problem in America is that there  is too much money in politics.  Because our politicians election campaigns are so heavily financed, either directly or indirectly, by money from big business, its no surprise that the agendas of big business often take precedence over the needs of the citizens.  The healthcare industry is one of the largest, most influential groups in politics because it is such a large percent of our GNP.

sick people are good for business. 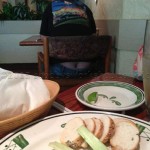 This is a common sight at all you can eat restaurants.  For those of you still thinking that obesity is truly a disease, try this.  Walk around a restaurant and compare what obese people are eating to that what slim people are ordering and eating.  Olive garden gives all you can eat salad and all you can eat very greasy, cheesy breadsticks.  Our table ordered a second free bowl of salad, the table behind us ordered a second free basket of greasy breadsticks.  As I mention time and time again, when it comes to losing weight, small choices add up to big difference over time.

previousNutrition and workout strategies for bodybuilders during Ramadan
nextAre “all you can eat” buffets strictly American?