#1 Most Important Safety Device For Bicyclists

A helmet is what people always put at the top of the list, it helps with a 20mph car collision but doesnt help much if the car is going 50mph.  My #1 device is one that keeps your pretty helmet from getting scratched :)

Less than 60 minutes ago my happy mood turned gray as I saw the aftermath of yet another cyclist getting hit by a car. When I rode by there were three police cars, a fire truck, and the ambulance had already left. The twisted commuter bike (I could tell by the panniers) did not bode well for the cyclist, if they survived I will be very surprised :( Such a tragedy, and one that repeats many times a day across the USA and the sad thing is that most of these crashes are preventable :(

I have been cycling 35 years and for two decades of that I did bike commuting 30 miles a day. I had to become an expert of sorts on urban survival to have a zero bike-accident record over my many miles of urban biking. I’m not going to talk about how things should be, I’m going to talk about the reality of how things are and how to avoid being a statistic like the poor person who was hit just an hour ago. As a cyclist, you and only you can keep yourself alive. I dont care WHO had the right of way, dead cyclists cant argue. Drivers are distracted: kids, eating, texting, talking on the phone – all these things mean that to keep yourself alive means assuming that cars are trying to kill you. Its like the video game frogger and you are the frog. Simply obeying the rules of the road wont keep you alive, its a good start, but its hardly sufficient.

There is one very important skill that I learned in driver training when I was 15. If you have this skill you can go your entire life without ever getting in an accident, many call you lucky – but you are not. Without this skill you just keep getting unlucky. Its never your fault but you always seem to get into fender benders. Whats this #1 most important skill? Situational Awareness. What does this mean? It means that at all times you know whats going on way in front of you, behind you, and on both sides. You know without looking if you can safely swerve into the lanes on either side of you. You know if you can slam on the brakes without getting rear ended. You see who is out there and are always guessing what stupid things they might do, then you are never surprised. These people with situational awareness are the ones who never get into accidents because they are able to avoid situations that put them at risk. So, all well and good but how does this apply to bikes? It is a bit different. Automobile drivers have pillow soft fluffy air bags to protect them from other cars – that and about 4000 pounds of steel! Bikes have none of that, our only hope for survival is to completely avoid those 4000 pounds bike-squishers. As cyclists what we have in our favor is amazing maneuverability and the ability to stop on a dime.  What’s different from cars is where the fatal collisions come from.  So lets talk about the three ways to get killed on a bike:

The car that is most likely to kill you is behind you!  Unless you have a rearview mirror, you dont have a chance!

I dont know who that poor soul was that probably lost their life tonight but hopefully their death was not in vain.  It inspired me to write this blog post and if I can save just one life by getting someone to buy a rear view mirror and be situationally aware then at least some amount of good came of this tragedy.

Please, if you ride a bike PLEASE get a rearview mirror!  I took the below photo of me and my mirror about a half mile from the accident location, you can tell I was in a somber mood as its one of the few pictures of me not smiling. 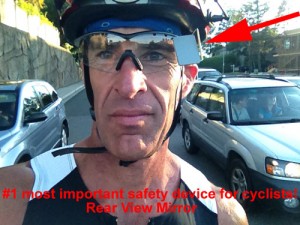 I have a glasses mount rear view mirror but have also used helmet mount ones.  Below is a picture of what you see thru the glasses: front and back all at once.  You can see the car about to pass me.  OK, so hypothetical situation.  I see the car moving into the bike lane behind me and moving fast, its clear they are going to turn me into a very flat-scooby.  What would I do?  I would get my butt over that curb and into the median even if it meant flipping over my handlebars and sliding down a hill.  Any contact with the car and its likely you will die.  A simple flip over the handlebars into a tree will just break a few bones. 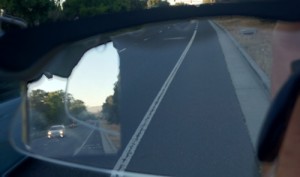