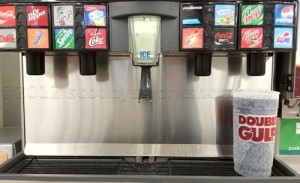 I must applaud mayor Michael Bloomberg on bringing attention to this important issue! Although Im not in favor of his proposed ban, it will undoubtedly start all kinds of constructive discussions on this important issue. I think we can reduce the nations consumption of sugary beverages without this sort of ban by making sure they have healthy choices and the necessary information to find them. As I mention in my website, the #1 easiest way to lose weight is to eat your calories rather than drink them! Reducing peoples consumption of these nutritional hand grenades is a great way to attack our national obesity problem. Why don’t I think his proposal will work? Simple. My guess is that at least 75% of soda in the United States is sold in fast food restaurants and convenience stores like Seven Eleven where the soda is self-serve. In those places, you are given a large cup that you fill yourself. Once you get your Mega-Gulp cup, there is nothing at all preventing you from filling it with sugar coke instead of diet coke. Here is my counter proposal which I think would be far more effective and it contains four simple points:

Again, I applaud Mayor Michael Bloomberg for bringing this important issue to the forefront but I respectfully disagree with his proposal. I think that by giving people healthier choices and the necessary information, they can make good decisions on their own.

Below is the proposed nutritional label to be placed on all beverage cups for soda of larger than 16 ounce capacity.  Each capacity cup would have appropriate calorie and yearly fat gain properly indicated.  With clear labeling like this people would understand the obesity implications of their daily soda consumption and be able to make better nutritional decisions. 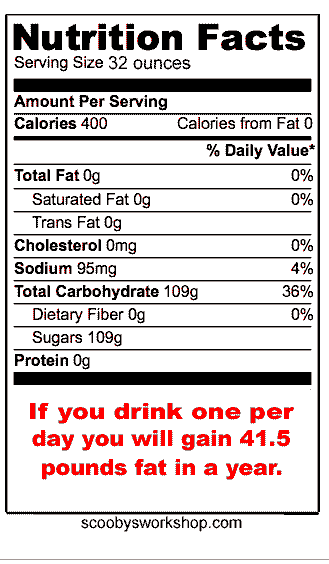 Now a lot of you with sharp eyes have commented that the statement “If you drink one per day you will gain 41.5 pounds fat in a year” in the above label is a gross simplification.  That statement is of course technically incorrect because it depends on what else you eat! If all you had was that one soda a day, you would die of starvation and malnutrition, not get fat! To be technically correct I should have said:

“Consuming an additional 400 calories of sugar per day over your TDEE (Total Daily Energy Expenditure) will result in gaining 41.5 pounds of fat per year.”

That statement is technically correct but it is long winded and it leaves many people scratching their head.  You have to ask yourself, who is the intended audience of these nutritional labels? Its certainly not nutritionists, doctors, or bodybuilders because they understand in no uncertain terms the nutritional and health implications of consuming 800 calories a day of sugar water.  These folks understand the above scientifically correct warning but they don’t need it because they already understand. No, the audience of my proposed new soda nutritional label is not the nutritional elite, its those who our educational system has failed.  Those people who have never heard of TDEE and don’t know how to read a nutritional label.  The same people who report that they “hardly eat anything” but yet continue to gain fat without realizing that its all the beer and coke they are drinking that is causing their obesity problem.     For this target audience who needs help, some simplification is required to get them the information they need to start losing weight.  We can’t provide a semester’s nutrition class in the one square inch available on the bottom of the nutritional label.  We need a simple can clear message about the nutritional ramifications of a one-a-day habit of drinking soft drinks.  Thats why I proposed the new simple label below because it could make the light bulb go off in millions of people:

“Oh, THATS why I gained 50lbs last year, its all the sugar in the double big gulp I drink every day.” 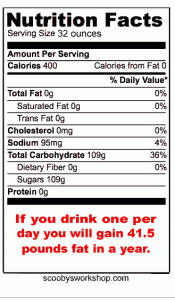