Lets think about what makes each of these exercises distinct:

In bench press, the motion of the bar is perpendicular to the spine. 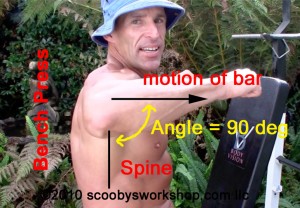 In the incline press, the angle between the spine and the motion of the bar is between 90 and 180 degrees 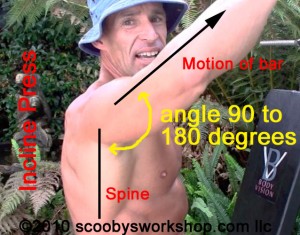 In the military press, the motion of the bar is co-linear with the spine 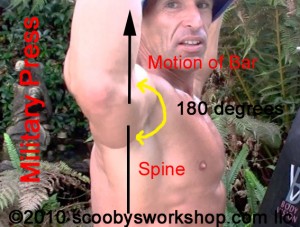 Almost everyone I know is strongest in the bench press, next strongest in the incline press and weakest in the military press. Why is this important? Because very often, people lift more weight than they can control and have to compensate with bad form. For example, this happens at the gym all the time. Someone is doing “incline press” with way more weight than they can really do, here is what they look like: 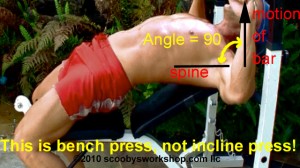 They arch their back to raise their hips way off the bench. What exercise are they doing? They are doing bench press, not incline press!! Why? Because the motion of the bar is perpendicular to the spine, the definition of bench press!

Lets take an even worse example, the military press. This exercise is for shoulders, not chest. The problem is that the shoulder is very weak when compared to the pecs, here is what happens all the time at the gym when someone is doing “military press” with way more weight than they can really do: 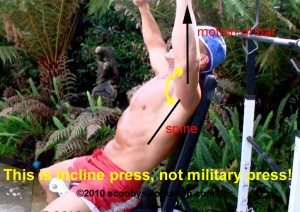 They slide their butts forward and lean way back on the bench. What exercise is this? Its incline press, not military press because the motion of the bar is not co-linear with the spine. What’s worse, this is almost 100% pecs and almost no shoulders.

You have to always be thinking about what you are doing when you are lifting. Think what muscles are being used, feel it. If you are working out shoulders, then work out shoulders – not chest!

Now lets talk a minute about the form you see competitive lifters use when trying to set bench press records in their weight class.  The rules vary a bit from organization to organization but for USA Powerlifting and the International Powerlifting Federation, the rules seem to be the same.  I have paraphrased the essence of the rules below:

The interesting thing you see from the above is 1) that the buttocks must remain on the bench and 2) The bar must be held with the bar touching the chest till the referee signals.  Now with some contortions, its possible to lift a lot more weight while still adhering to the rules.  Rule 2 above states that the bar has to touch your chest but you can do this by one of two methods, you can either lower the bar or raise your chest.  If you can raise your chest higher then it means you dont have to lower the bar as far and thus you can lift more weight by limiting your range of motion.  Some people carry this art form of raising the chest up to the bar to amazing extremes – nearly to the point where the ROM is so limited that the exercise is useless for building strength or mass.  Take the below example.  If you are flexible enough you can arch your chest upward while keeping your butt on the bench. 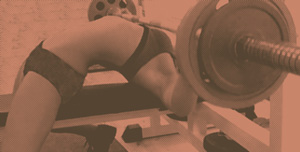 With the exception of the fact that the foot is not flat on the floor, this is legal form.  You have to ask yourself though, what are you trying to achieve.  If you are practicing for lifting records then this kind of form is what you need to practice.  However, if you want your pecs to get stronger and bigger then all this kind of form does you no good at all and just increases your chance of injury.  If you are working on building strength and mass in your pecs, keep your lower back on the bench as well as your butt – no arching like a banana and no thrusting your hips upward.

Don’t be blinded by the never ending quest to lift more and more weight or you will fall into these traps and remember: The exercise you are doing isn’t determined by the bench you use, but how you sit on it!