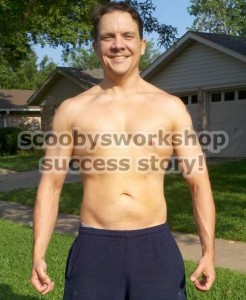 Just wanted to say thanks for making such a great site for everyone. I’ve used it for over the past year to help me both get into shape and as a means of survival when I was set to go under for head surgery. My fitness journey began in January of 2012 as just a simple new year’s resolution to lose a little weight. I was not really into it and did not put much effort into it when I first started, but that all changed in April when I had a kidney stone. They are not lying when they “try” to describe the pain of one of those things. The ER visit ate up my deductible for the year, which turned out to be a good thing as I had a head wound that would not heal. I began trying to get it taken care of, only to discover that it was not a simple wound, but an infection that was growing under my scalp and into a plate that was there from when I was a child. The only way to fix the problem was to go under and have the infection and plate cut away. I was very much afraid at this point of what was to come. Not only did I have a long recovery ahead of me I was told, but I was also in bad physical shape which was going to draw out the recovery time. The only thing I had was time to get ready…6 months to be exact. I decided I would do all I could to survive the surgery and recover quickly. I am the sole source of income for my little family (my wife and three girls). They were depending on me to pull through and to get back to work as I have no disability time, only my vacation time. Luckly I had 11 weeks of vacation saved up, but I was being told my recovery could take up to 3 months. I got a gym membership and began trying to get the fat off just by running, but progress was slow. I started researching weight loss and found your site. The calorie calculator was my life saver! I was able to calculate exactly what I needed to eat and how much based on my current lifestyle at the time. I don’t want to draw out everything I did here and make you read through it all, but I followed a lot of advice from your site and used it as a tool to get me from my 205 pounds down to 140 before surgery. My recovery was long as expected, but I did get back on my feet in about 2 weeks and was given the go ahead to return to work 6 weeks after that. I have not stopped working out since, but I did change my focus from fat loss to muscle gain. I hope my pictures can help someone find in themselves the courage to change. It is not easy, but it is more than worth it in the long run.

As for how I did this and my training, it was using beginner moves and running at first. Mostly just running and knowing exactly how many calories I was eating. This is all I needed to get the fat off, but the results were less than stellar. I’ve attached a third photo that you do not need to use that shows what just running can do when you are as large as I was. After my recovery, I started a 5X5 beginners program and have been using just that as I’ve so far been very happy with the results. The main key is still diet. You have to watch what all you eat. I’ve not been to a fast food place for myself in over a year now. I cook and freeze chicken and heat it up in a pinch when there is no time to cook, but for the most part, I enjoy cooking. I’ve found that you don’t have to kill yourself with a workout to make amazing changes to you physical appearance, you just have to do something….anything but sit and let yourself go.

Keep up the good work Scooby and thank you for all the wonderful information you have shared with all of us.

Hey Michael,  Congratulations on doing what you could in preparing for the surgery.  I have been told by many a surgeon that people who are in really good shape before surgery heal faster.  Had you not been in such fantastic shape, things might not have turned out as well for you.  You made it happen!  Congratulations on your new teenage physique too :)